Omo is Ethiopia's largest most remote park and is not easily accessible. The park does have a head quarters and a new airstrip but has little support for travellers. It is located on the west bank of the Omo River and was established as a national park in 1966. The park has approximately 2,527 square miles of vegetation and wildlife.

Omo National Park is home to some of Ethiopia's native tribes which are the Dizi, Me'en, Mursi, Nyangatom and Suri can be found there. It is also home to many unique animals to include Buffalo, Cheetah, Eland, Elephants, Giraffes, Leopard's, Lions and Zebras to name a few. There are over 306 species of birds that can be found in the Omo National Park. 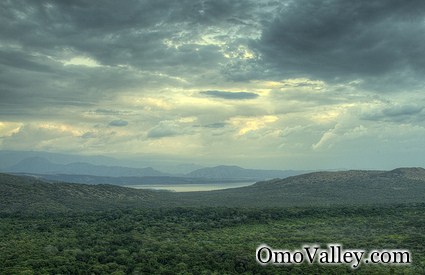 Mago is found on the east bank of the Omo River. It is approximately 1,343 square miles and its highest point is Mount Mago. The park was established in 1979 and is Ethiopia's newest National Park. The Mago National Park is divided by the Mago river which is a tributary of the Omo river. Located within the boundaries of the park is Lake Dipa. The west side of the park is the Tama Wildlife Reserve and to the south is the Murle controlled hunting area. There is a park office and all roads to and from it are dirt.

The park mainly consist of grasslands with Omo National Park & Mago National Parksome forest areas located around the rivers. Many animals can be found in the Mago National Park. Some of the common ones are the buffalo, cheetah, elephant, giraffe, hartebeest, leopard, lion and zebra. Bird species are also prevalent in Mago, with the rare Turdoides tenebrosus (Dusky Babbler) being found at Lake Dipa. Along the river in the lower Omo Valley there is a diverse ground of ethnic tribes that live in the park. The Mursi people are amongst the most common to visit.