In 1975, Kenya changed the lake's name from Lake Rudolf to Lake Turkana. The Turkana people were the predominant tribe living in the area at that time and is where the name came from. The majority of the lake is located in Kenya, but the northern end of it crosses into Ethiopia making it the final destination of the Omo River. The lake supports wildlife as well as many surrounding tribes.

Lake Turkana is the world's largest desert and alkaline lake (Alkaline meaning salt lake). It is measured to be about 4,349 square miles. Turkana is a salt lake and the water is drinkable, but not considered palatable. There are three rivers that flow into the lake. The Omo, Turkwel and Kerio. Lake Turkana has no outlet and most of its water is lost to evaporation.

Many animals can be found in or around the lake. There are a number of fish in the lake to include the African Tetras, African Knifefish, African Arowana, African Elephant fish and the Nile perch to name a few. Many bird species migrate to the lake. Some common ones are the African Skimmer, Common & Wood Sandpiper, Greater Flamingo and the Little Stint. Reptiles and Mammals are both present as well. The Nile crocodiles are found there with large turtles. Several species of Zebras & Gazelles are found and an occasional sighting of a giraffe.

Ever year the river floods, providing the soil much needed irrigation for the tribes to grow their food. Many of the natives cultivate crops on the banks of the river. In 2006, heavy rains flooded the river causing many deaths. Experts blame deforestation for this particular tragedy, claiming the rivers are unable to hold as much water. Also in 2006, construction of the Gibe III dam began causing a large debate on the possible damage it will cause to the ecosystem, animals and local tribal communities. 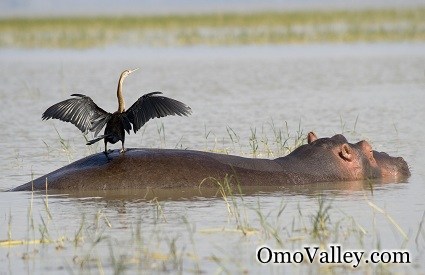 Turkana is a favorite place of anthropologists. It is has produced some of the world's most fascinating human evolutionary fossil finds. Many Hominid fossils have been found around the lake dating back about two million years ago. Hominids are part of the Homininae family which consist of humans, gorillas and chimpanzees. These fossils are considered by some, to be the first findings of extinct human relatives. Because of these findings, the lower Omo Valley and Lake Turkana is called the cradle of mankind.

Lake Turkana has been deemed a World Heritage site by the Word Heritage Committee.